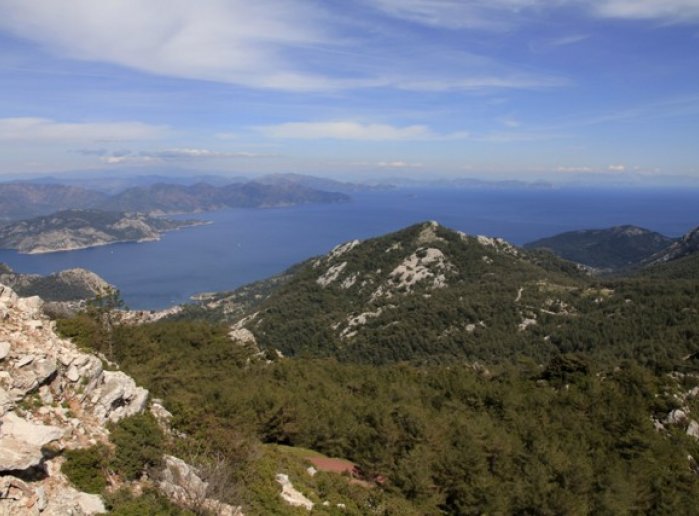 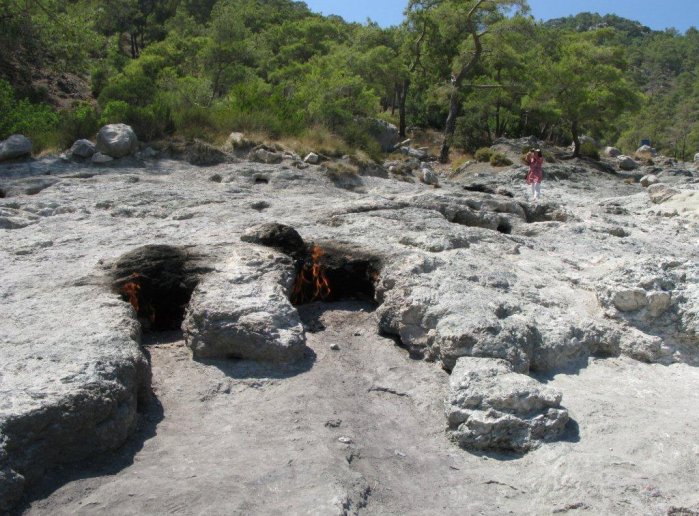 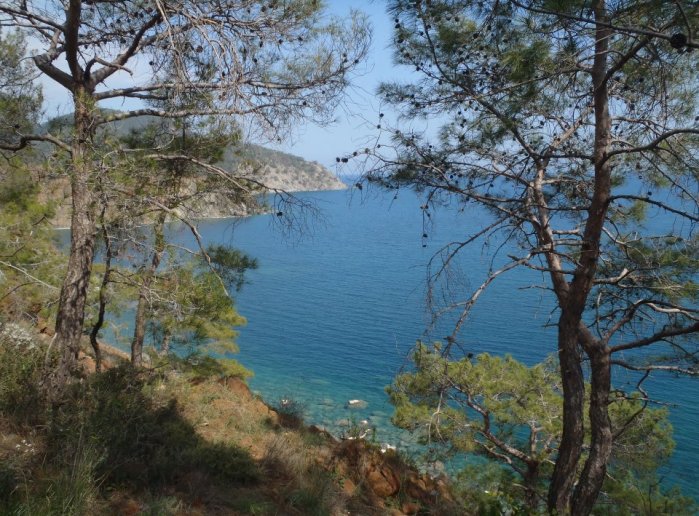 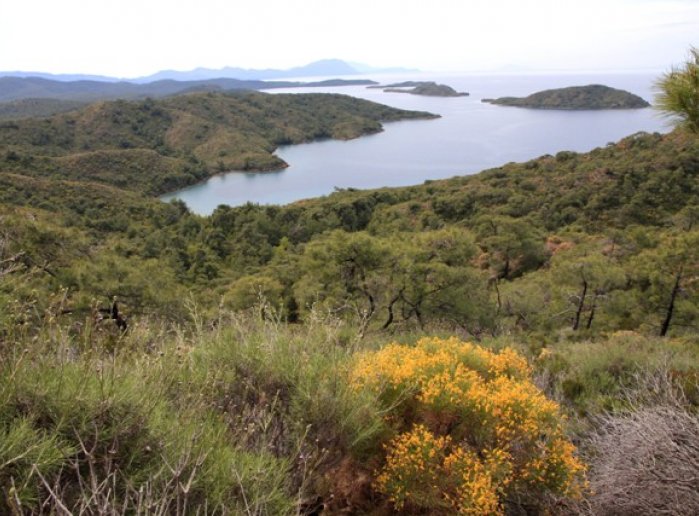 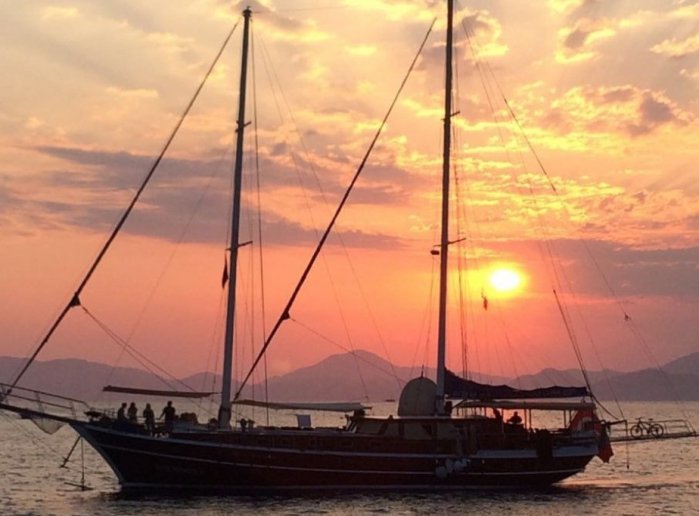 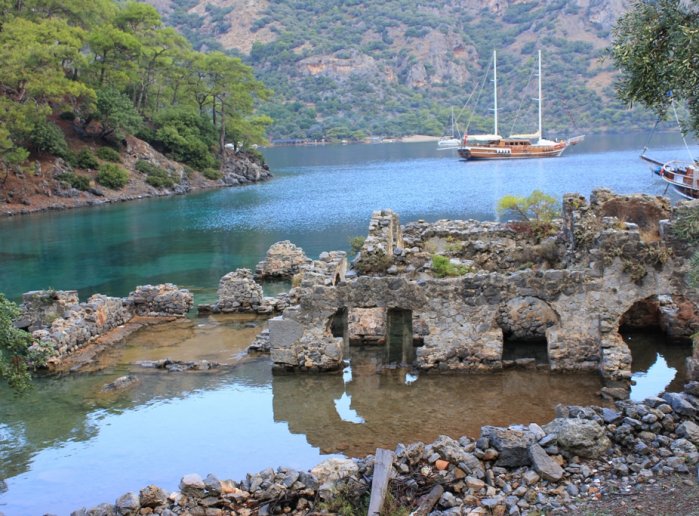 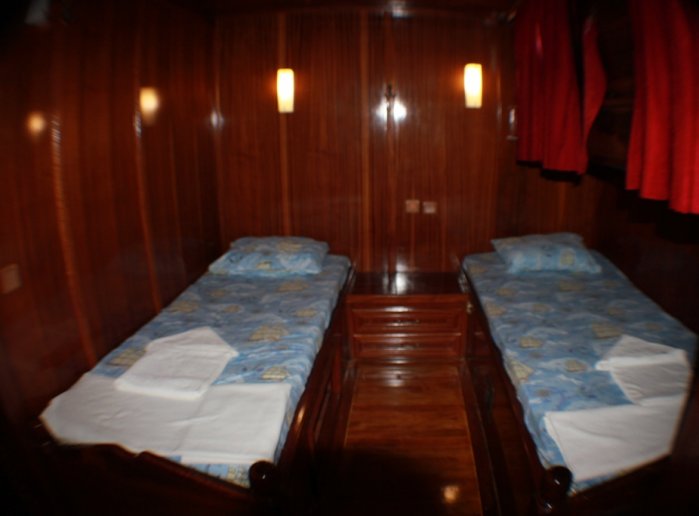 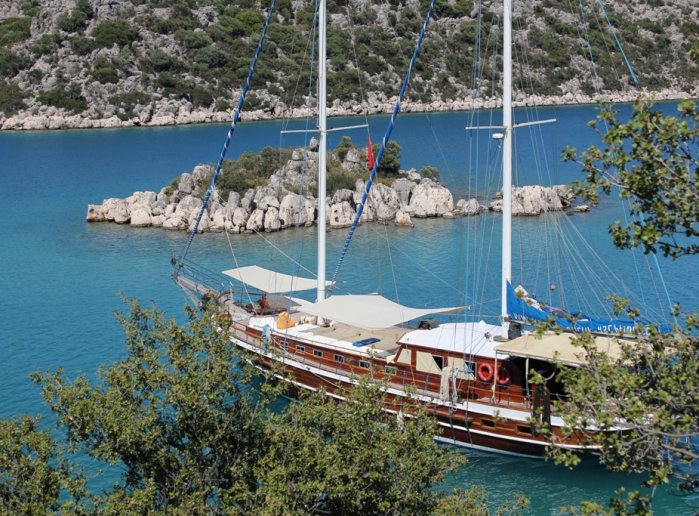 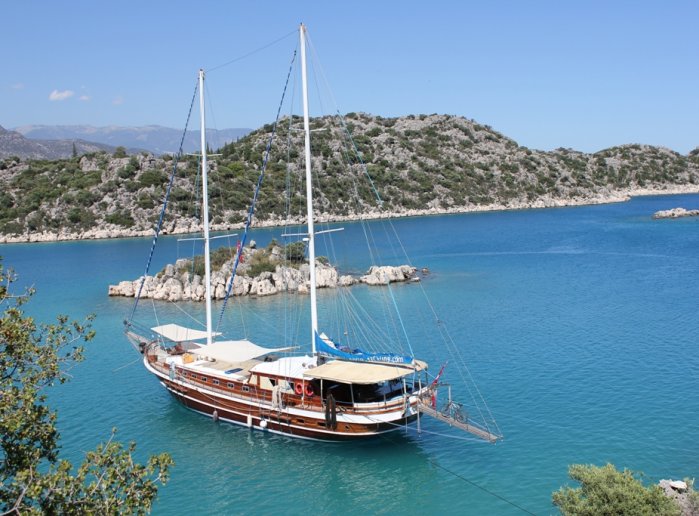 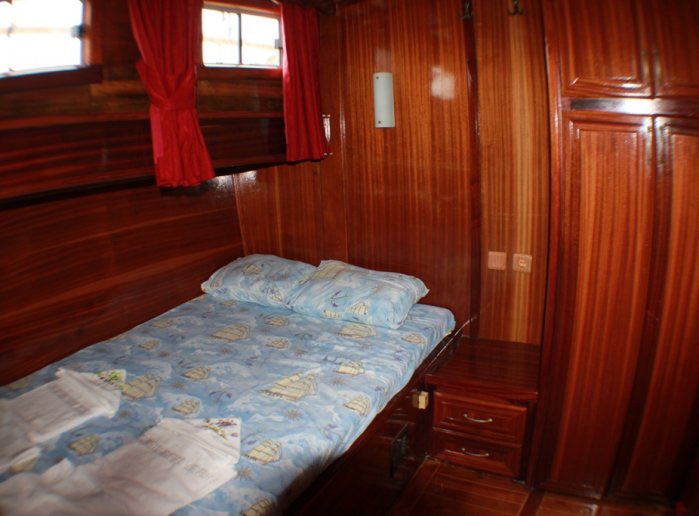 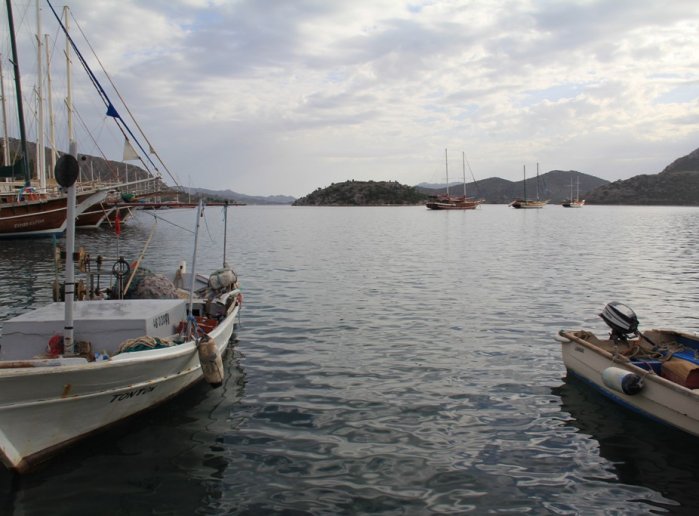 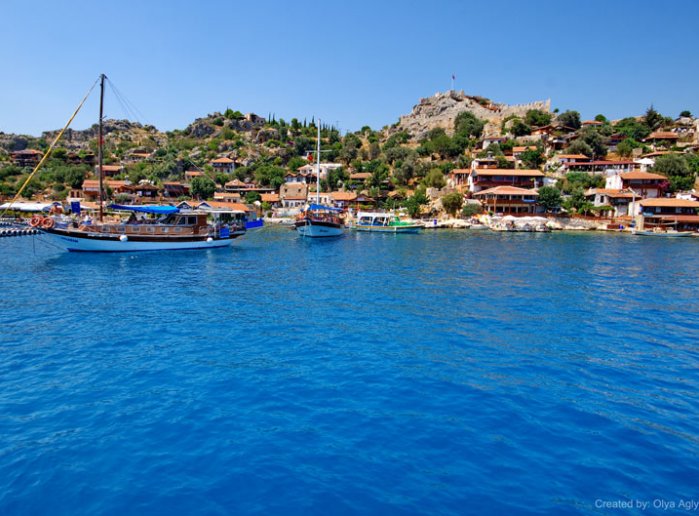 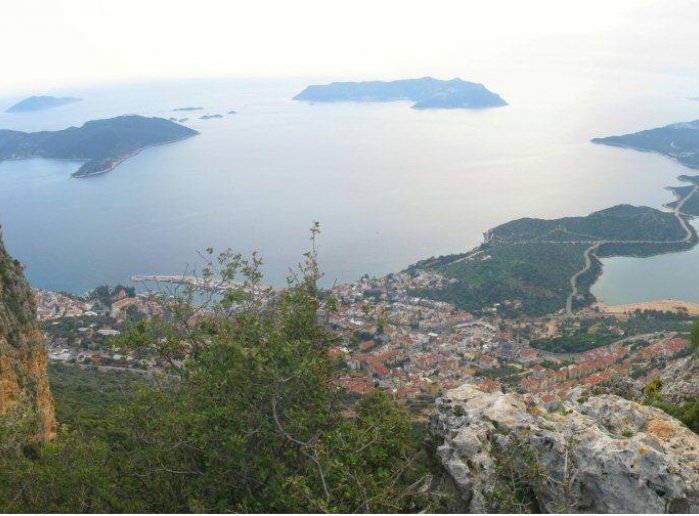 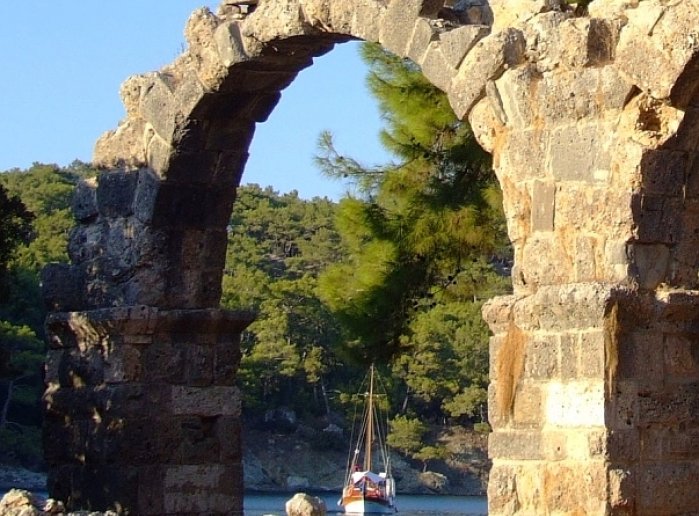 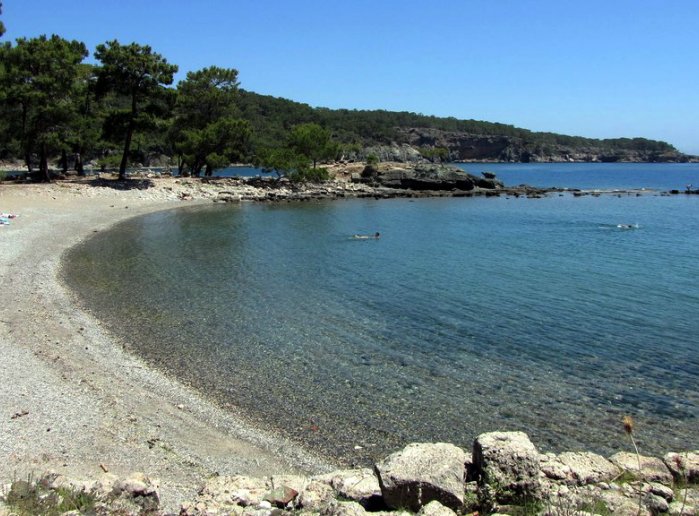 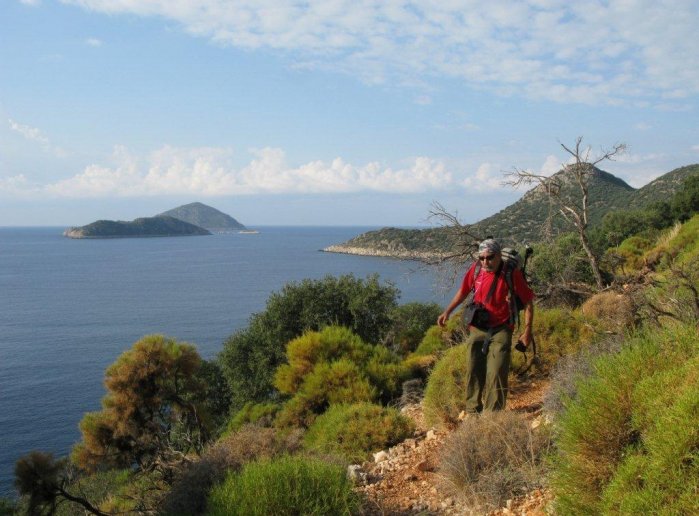 This programme contains trekking and blue voyage that is interesting for both nature and history lovers. Lycia is the historical name of the Tekke Peninsula, which juts into the Mediterranean on Turkey’s southern coast.This 9-day programme consists of walking and discovering of natural historical places and cruising in blue waters of the Mediterranean. The outstanding monuments of Lycia would welcome you upon your visit the fabulous bays. The history, the sun and the sea have altogether carved out a wonderful beauty that you may consider it a genuine loss not to live through such an experience and feel the unique azure sea.

General Information:
This Cruise is memorable way to get to know  Lycian Coast, the most beautiful place in the Mediterranean region. Lycian Coast runs along the southern coast of Turkey from Fethie to Antalya. Lined by Taurus Mountains that decorated with white rocks, pine trees and oleander trees, this area contains the hidden monuments and the remnants of Lycian civilization and is one of the best preserved areas of the notorious Greco-Roman period. It is an area with a numerous hidden treasure in its notable natural cavities. During relaxing cruise you discover the traces  of Greek, Roman, Phoenician sailors  travelling with valuable goods to Aegean coastlines – a wonderful area with rocky peninsulas, thousand of bays, sandy coves and numerous historical remains. Cruise along the magnificent Lycian coast of Turkey and explore the beautiful ancient cities with stunning landscape, places that have remained inaccessible for a long time, free of any population.

Day 1. Antalya.
Transfer from Antalya airport to lovely pension in Old City (Antalya). With its beautiful sea view and fascinating architecture Antalya was one of the attractive cities of Ottoman Empire.You can lose yourself in the narrow streets of Old City where you admire well-preserved mansions - old structures.

Day 2. Ulupinar-Chimera
After breakfast in the hotel in Antalya we start the first part of the trip. Direction is Camyuva (55km). Then get off the bus to walk. Walk through pine trees to reach antique village Phaselis. About 2,30 hours later continue the trip to Ulupinar village by transfer vehicle. Have lunch admist the beautiful trees and waterfalls. Then head towards the coast to visit Chimaera. The eternal flame of Chimaera was so named after a mythical fire-breathing beast, part lion, part goat and part snake. This extraordinary natural phenomenon is a series of two dozen or so permanent fires emerging from the ground, caused by methane emissions and is located within the Olympos National Park towards the top of a 300m high hill. Cirali itself has a long sandy beach and it is one of the few protected beaches where Loggerhead Sea Turtles come to lay their eggs. Pension, C?rali. Walking time: 3 hrs; distance: 8,5 km , 450m  of ascent and descent 450m.

Day 3. Chirali-Adrasan
After breakfast direction of the trip is from Ulupinar to Cirali. Following the Lycian Way you ascend through a canyon to a high grazing area where there is a small shepherds hut. Reaching a higher ridge you have great views to the magnificent peak of Mount Olympos. Continuing along the ridge line you now walk beneath the flanks of Musa Dag (Moses Mountain), where a boat shaped stone formation was discovered. Continuing through meadows the trail then descends through small pine trees and down through a limestone gorge to emerge at the spellbindingly beautiful Bay of Adrasan. Pension, Adrasan. Walking time: 6-7 hrs;  distance: 17,5km, 720m of ascent and descent

Day 4. Adrasan-Karaoz
A truly wonderful day of coastal walking lies ahead as you walk to the upper lighthouse at Cape Gelidonia. A short vehicle transfer takes you to the start of the trail which then twists and turns through pine woods and crags high above the coastline. The trail occasionally follows the cliff edge itself and affords dramatic views to hidden coves below, as well as across the sea to a series of tooth like uninhabited islands. Contouring the hills of this remote Gelidonia peninsula, the trail climbs to reach a crest and then descends to the upper lighthouse. This isolated, famous lighthouse has no electricity or phone. Pausing to take in the breathtaking views out to sea and along the coastline of the peninsula, you’ll then head down through pine forest to reach the shore line once more, which you will then follow to the village of Karaoz from where a vehicle transfer returns you to your Pension in Adrasan. Pension, Adrasan Walking time: 7 hrs; distance: 15 km, 700m of  ascent and descent

Day 5. Adrasan-Myra (Lycian  tombs) – Andriake Harbour – Gokkaya Bay
After breakfast transfer from the hotel in Adrasan to Myra, one of the most important cities of Lycian League and Christianity. The site of Myra has a well preserved theater, walls of Lycian rock tombs and an acropolis. In 4th century Myra gained its widespread fame because of the many miracles attributed to its bishop, Saint Nicholas. Along the way visit the striking Roman ruins and Church of St.Nicholas. The earliest church of St. Nicholas at Myra was built in the 6th century. The present-day church stems mainly from the 8th century. In the late afternoon, continue the way to Andriake Harbour at Myra. There embark on board to begin the second part of trip (gullet cruise). (Embarking on Burch Bay is also available).  Overnight on board. Walking time: 3 hrs;  distance:  7 km,  220m  of ascent and descent

Day 6. Gokkaya –Simena Castle – Kekova Bay
After breakfast start walking from Gokkaya. The path way with many trees and pastures leads to Kekova region. The small village of Kalekoy, ancient Simena, located on a rocky peak of 40m height over the sea, can be reached by sea or on foot. The village lies admist a Lycian necropolis, which is partially sunken underwater. On its northern side there are the ancient ruins, mosaic pieces – partly sunken – of  Dolchiste, an ancient town which was destroyed by an earthquake during the 2nd century A.D. There are the ruins of church and houses of Byzantine period on the southern side. Afterwards you have time for swimming in crystal clean water, then come back on board. Anchoring in one of the Bays for dinner and overnight. After dinner can spend time on the beach. Overnight on board. Walking time: 2,5 hrs;  distance: 5km

Day 7. Kekova – Ucagiz – Antique Aperlae
Continue walking to discover new places. Walking to Ucagiz  (ancient name, Teimiussa) ,  a small pretty fishing village 1 km from Kalekoy, north of a small bay by the same name, with the ruins of Teimioussa to the east. The name "Ucag?z" means "three mouths", referring  to the three exits to open sea. Then proceed down switchbacks to the ruins of Aperlae. Interesting small town, no real excavations done, but can make out the city walls, a basilica, and a series of houses with lots of potsherds, sprawling down the hill to the bay. At the other end of town, rock steps lead past more Roman tombs, and some Lycian ones. Overnight on board. Walking time: 3,30 hrs; distance:  6,2 km, 235m  of ascent and descent

Day 8. Ufak Dere Bay – Kas (Antiphellos)
After breakfast sail to Kas. On the way visit Besh Adalar Bay, Hidayet Bay and Limanagzi Bay.There are some ruins of the world’s oldest ship. Founded by the Lycians, Kas was originally called ‘Habesos”’ in the ancient language of Lycia. Later the ancient Greeks called it “Antiphellos” (meaning “stony place”) because it was the harbour infront of the city Phellos which was across from Kas. Antiphellos was an important port town during the Hellenistic period around 4th century BC.  Kas affords fine view of Greek Island Kasteloriso (ancient Megisti), that is just opposite it.

Day 10 Oludeniz - Fethiye
For overnight stay sail back to the hotel in Old City in Antalya.

You will be met upon arrival at Antalya Airport (the joining point for this trip) on day 1 of the trip and transferred to your first night’s accommodation in Antalya (approx. 30 mins). At the end of the trip on day 9 you will be transferred back to Antalya Airport from your Pension in Antalya. Transfers will be timed to coincide with your flight arrival/departure times.Baggage
Please make sure that your baggage is clearly marked with your name, inside as well as outside, in case the labels get detached. We request you limit your main luggage to one piece per person and recommend you to pack your clothes in plastic bags to ensure they remain dry. As your main baggage will be transported by vehicle a normal suitcase can be used for your main baggage. During the walking day you’ll carry only your usual daypack.

The first part of the programme provides an overnight in the pensions.You will be relaxed and enjoy your evenings at the pensions in the historical places with its natural beauty and in close vicinity of the seaside.  Being far from the stresses of urban living you’ll be satisfied your holiday. All rooms are furnished with wooden furniture and feature air conditioning, shower, toilet. Breakfast and dinner are served daily as an open buffet. Lunch packages for trip are available.

The second part (last 4 days 3 nights) provides an overnight on boat. Breakfast and dinner are served there, too.  Lunch packages are available also.Take a chance to taste traditional turkish delightful dishes. You’ll truely feel like you are at home and pleased hospitality of Turkish people.

Map will be there in a short while...